“Give Blood, Save a Life” on Tuesday, March 6

The 4th Regular Session of the SPIBU Assembly Held 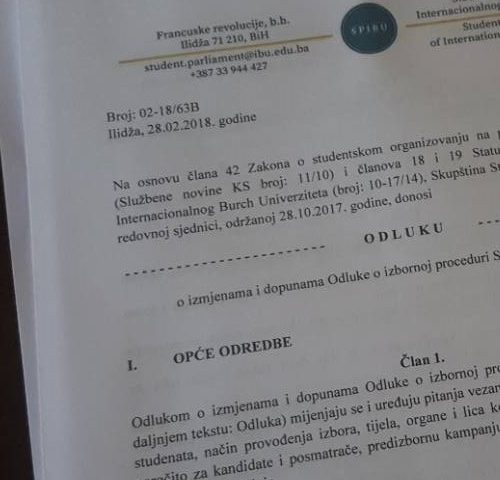 On Wednesday, February 28 at 5:00 p.m., the Assembly of the Student Parliament of International Burch University held its fourth regular session, where it adopted several important decisions.

These decisions included those relating to the founding and organization of student media activities, naming an acting secretary of the Student Parliament, amending the Decision on the Electoral Process and appointing an Electoral Commission to carry out elections.

After adopting the Agenda and raising for the national anthem of Bosnia and Herzegovina, the Assembly amended its Rules of Procedure in order to specify certain procedures, especially those particular to the constitution of a new Assembly.

Then, an Instruction to student representatives to compose a report on their activities in the University Senate and faculty councils, all of which will be made public upon their adoption by the Assembly at the end of March, was adopted unanimously. These information will be used to evaluate the work of the student representatives in completing the agenda of the Student Parliament and to publicize their hard work.

Student media activities, which may potentially include digital, print, radio, multimedia and other forms, was regulated. The Student Parliament may decide to publish various forms of publications at each department, which will be evaluated at a later time, but will publish a magazine at the University level by the end of the semester.

Since graduation is coming near and the Student Parliament has requested of the University management to be involved in both the decision-making process and the realization of the graduation, the Assembly adopted a decision that delegates the authority to appoint members of the organizational board for the graduation to the President.

In accordance with its Statutory responsibilities and the principles of proportional representation, the Assembly decided upon the composition of the next Assembly as such:

Due to pointed inadequacies in the current Decision on the Electoral Process as well as those which were evident during the previous elections in October and following a process during which all members of the Assembly, as well as certain other students, contributed their ideas, the Assembly considered and adopted without amendments a new Decision on the Electoral Process, which will be in effect for the April elections.

Lastly, the Assembly named the Electoral Commission, which will organize and carry out the April elections in accordance with the new Decision on the Electoral Process. Mersiha Jaskić was named president of the Commission, while the other four members are: Hadijate Đogić, Teufik Kadrić, Emina Kišija and Kenan Nazić.