Apply for the HEA Public Competition for Student Experts

Request to Conduct Survey Rejected by 2 of 3 Faculties 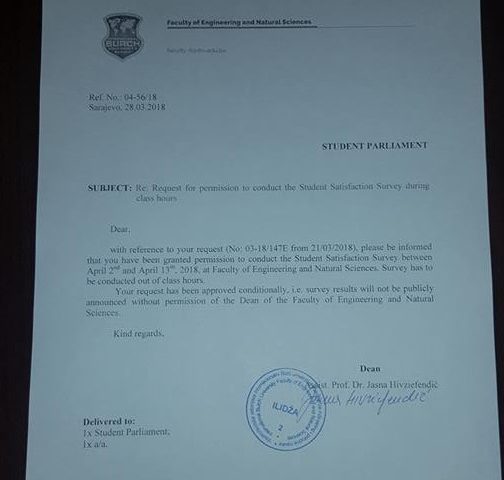 Conducting the student satisfaction survey has been an obligation of the Student Parliament for several years mandated by several decisions adopted by the University Senate, the most recent of which was adopted at the Senate’s 148th session on December 20th.

The decision mandates three Student Parliament representatives with contributing to the drafting of a University self-evaluation report by conducting said survey within five months (i.e. by the end of April).

In order to survey as wide a segment of the student population as possible, the deans of the three faculties at International Burch University were contacted to give their permission for the Student Parliament to conduct the survey during class hours. The concept is to conduct the survey during the last 10 minutes of a course, in agreement with individual course instructors, throughout the two weeks between April 3 and April 13.

Follow-up requests to reconsider their decisions were sent. Dean Dinç refused to reconsider his decision, while Dean Hivziefendić ignored the correspondence.

“This certainly seems like a purposeful sabotage of our work, even though we are and will continue giving them the benefit of the doubt,” Amer Kurtović, the president of the Student Parliament, said.

The next step, according to Kurtović, is having the student representatives submit initiatives in the two Faculty Councils to have them reverse the deans’ decisions; otherwise, “we’ll have to be creative in coming up with ways to survey the student body which some people somewhere obviously don’t want surveyed in an effective fashion.”