Invitation to the 2nd Constitutive Session of the Assembly

Invitation to the Acknowledgements Ceremony 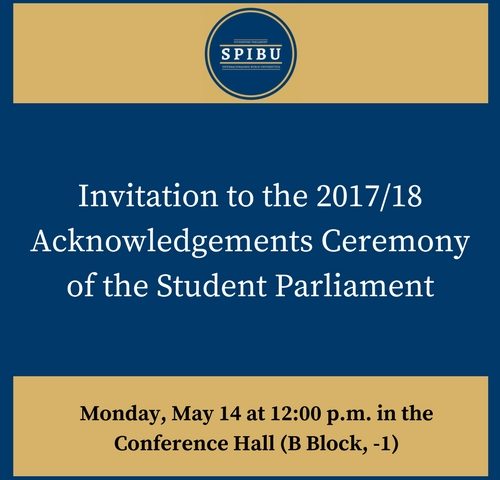 All students, staff and others are cordially invited to the Student Parliament’s 2017/18 Acknowledgements Ceremony, which will take place on Monday, May 15 at 12:00 p.m. in the Conference Hall in Block B of International Burch University.

At the Acknowledgements Ceremony, students who have contributed to the work of the Student Parliament of International Burch University during the academic 2017/18 year in any capacity will be recognized and thanked in a fitting fashion.

In addition, the “The Student” award will be officially bestowed upon the winners of this year’s award – Sabina Halilović, Hata Kujraković and Jasna Nuhić.

Both former and current officials of the Student Parliament, as well as representatives of the University, will address those present.

For all inquiries, please do not hesitate to contact us by e-mail (at student.parliament@ibu.edu.ba), by private message on Facebook or in person at the Student Parliament Office (no. 417).

We look forward to seeing you there.